The recently described scaffold model of murein architecture depicts the gram-negative bacterial cell wall as a gel-like matrix composed of cross-linked glycan strands oriented perpendicularly to the plasma membrane while peptide bridges adopt a parallel orientation (B.A. Dmitriev, F.V. Toukach, K.-J. Schaper, O. Holst, E.T. Rietschel, and S. Ehlers, J. Bacteriol. 185:3458-3468, 2003). Based on the scaffold model, we now present computer simulation studies on the peptidoglycan arrangement of the gram-positive organism Staphylococcus aureus, which show that the orientation of peptide bridges is critical for the highly cross-linked murein architecture of this microorganism. According to the proposed refined model, staphylococcal murein is composed of glycan and oligopeptide chains, both running in a plane that is perpendicular to the plasma membrane, with oligopeptide chains adopting a zigzag conformation and zippering adjacent glycan strands along their lengths. In contrast to previous models of murein in gram-positive bacteria, this model reflects the high degree of cross-linking that is the hallmark of the staphylococcal cell wall and is compatible with distinguishing features of S. aureus cytokinesis such as the triple consecutive alteration of the division plane orientation and the strictly centripetal mode of septum closure. 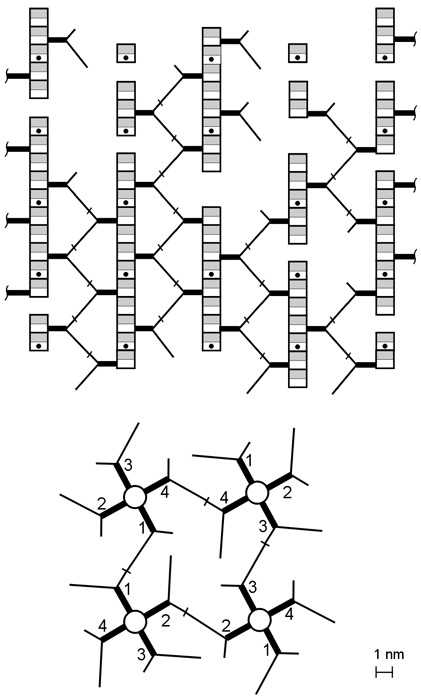